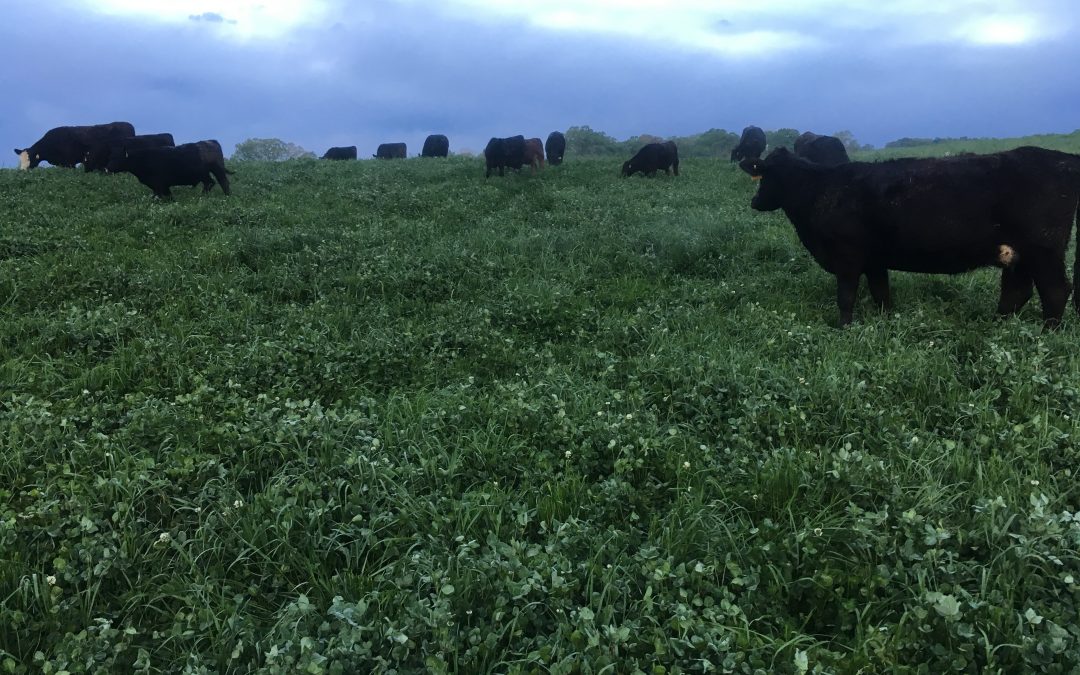 Just a few weeks after the launch of our new website in the summer of 2019, I received some phone calls and emails regarding the photos of our pastures.  I had one gentleman insinuate that we were not being truthful about the lack of fertilizer and herbicides based on the forage in the pictures.  He kept stating that “there just ain’t no way the pastures could look that good without fertilizing and spraying for weeds.”

The pictures of our farm were taken in both our annual and perennial pastures. Obviously, we used the best pics for the website, but overall, our pastures look pretty good.  A close examination of the pictures will reveal clover, vetch, and dogfennel in our perennial fescue pastures. Our annual pastures in the photos consist of ryegrass and a clover mix.  Clearly, we are not using herbicides or there would be no clover and other broadleaf species.  There are 32,000 tons of atmospheric nitrogen over every acre, and you only need legumes to capture it for free. Legumes increase forage quality and palatability; a win, win in our opinion.

As I explained to the caller, we let the cows do the fertilizing using grazing management. We do have weeds, but using planned grazing we have also discovered that cows will eat a lot of plants that most people consider “weeds”.  Therefore the “weed” is turned in to “feed.”  Every plant has its place in nature as long as it does not dominate the landscape.  Biodiversity is the key to soil health and nutrition. Using livestock to manage the land creates biodiversity.

We are moving the cows across the land twice a day, feeding hay and limiting animal access to only what they need to prevent waste.  We accomplish this in less than 5 minutes per move using poly wire.  This method not only minimizes the negative impact that equipment has on the land during wet weather, it evenly distributes the fertilizer and organic matter for our spring oats to be planted in a few weeks.  We are seeing vast improvements in our land and are very excited about the positive effect this has on the environment as well as animal health and in turn, human nutrition.

In this short video, Josh looks at the fertilizer distribution than can be obtained using the cows.